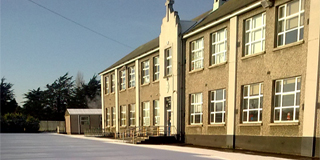 In 1856, the Society of St Vincent De Paul purchased a building in Mountbrown, near Kilmainham, to cater for boys who had lost their parents. Within a year, this building proved to be too small and land was purchased at the junction of Finglas Road and Botanic Road and a very imposing building was erected behind the railings where the apartments in Dalcassian Downs now stand. This had accommodation for 150 boys and also provided school facilities. It was known as St Vincent De Paul Orphanage but the boys were always called boarders. There was also a farm attached which provided most of the milk and vegetables needed. By the time of its centenary in 1956 very little had changed as there were still 140 boarders and the farm was still in operation. The Christian Brothers ran the orphanage and school from the time it opened in 1860 until it closed (due to falling numbers in the orphanage) in 1973. A big event happened in 1927. Up to then, the only boys in the school were the boarders, but in January 1927 the first day boys enrolled. This put a very heavy strain on the accommodation and a new primary school, St. Vincent’s C.B.S. Primary School, was opened in 1939. The secondary school continued to operate in the old building until the new secondary was opened in 1964. The swimming pool was built in 1968 and the hall in 1976.